As a child, Dolly Sen was an alien in Empire Strikes Back. She knew then she would never know normal life. Her journey as an 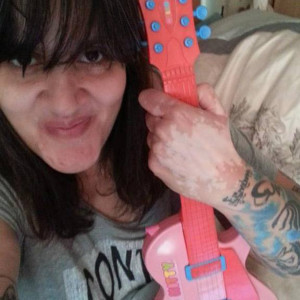 artist has taken her up a tree in Regents Park, to California’s Death Row, to the Barbican, Tower Bridge and the Royal Academy, Trafalgar Square, and up a ladder to screw a lightbulb into the sky.

Dolly’s creativity aims to put reality over her lap and slap its naughty arse.

Dolly is an award-winning writer, artist, performer and filmmaker.  She has had 10 books published, been nominated twice for a Dadafest Literary Award (2006 & 2007), and won several awards for her poetry. Her subversive blogs around art, disability and humour have a huge international following.  Since 2004 she has exhibited and performed internationally. Her most recent projects have been a digitally commissioned work for Short Circuit and the Brighton Digital Festival, where she gave an ordinary website a psychotic episode and changed its programming forever, and the creation of the popular Madvent Calender for Christmas 2014.  To find out more go to www.disabilityartsonline.org.uk/dolly_sen_blog

Scroll back to top